We asked, you voted, and the results are in!  The Fanny Pack is a fan-selected collection of certified bangers from our tasty history. That’s right, some of your favorite brews are back in action: Peach Dodo Gose, Cougar Blonde Ale, Puma Pilsner and Mosaic Pale Ale. Too good to be true? Just downright awesome?!? Yes, yes, and then some.

Keep an eye out for the Fanny Pack on shelves near you beginning this week. It’s been a while since some of these brews have been out in the wild, so a bit of re-introduction may be in order. To get the lowdown on these tasty encores, read on! 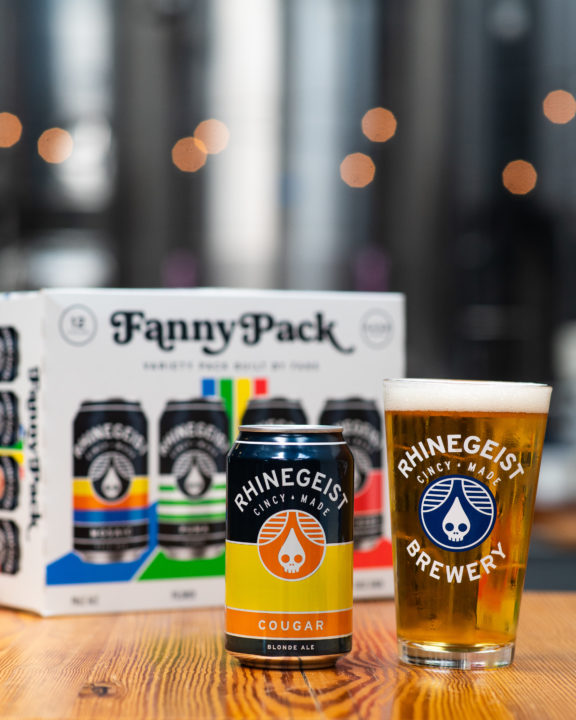 What is the origin story of Cougar?

In the days before craft lager became common and ubiquitous, most breweries’ lightest offering was a blonde ale. For us, this was Cougar, brewed to be a light and refreshing alternative to Truth, our flagship IPA.

Why do you think this struck a chord with fans?

As light and refreshing as Cougar is, it still delivers plenty of flavor. Featuring notes of crisp, crackery malt, mild honey-like sweetness and just a hint of balancing bitterness.  Cougar finishes with a clean, subtle grain character that lingers pleasantly.

Cougar and summer are a perfect match! Cougar is light, bright, and finishes with just enough malty sweetness to draw you in for another sip.

What foods would pair well with Cougar?

Cougar pairs perfectly with a cheeseburger. 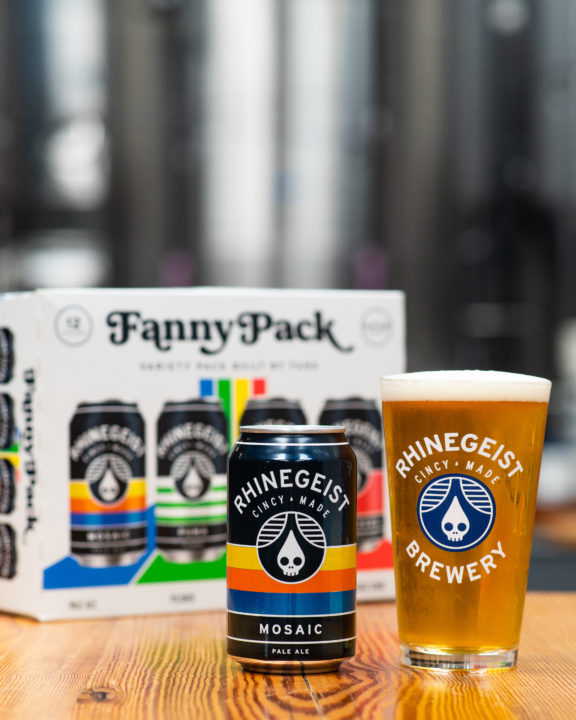 What is the origin story of Mosaic?

When this brew debuted, American pale ales were incredibly popular. New hop strains were being developed at an accelerated pace, and everyone was excited to explore the new flavors they could create. We had a rotating power pale ale series, many being beers brewed with a single hop, all utilizing the popular new varietals. With Mosaic’s reputation already established as an excellent dual-purpose hop (see below), it was an obvious choice to use in a pale ale.

This was one of the most popular single hop pale ales ever brewed by Rhinegeist. Why do people love this hop so much?

From the moment it was introduced about a decade ago, Mosaic (the hop) has been beloved by both craft brewers and drinkers alike. A dual-purpose hop is a varietal that can be used both early in the boil to add bitterness, as well as late in the boil and in dry hopping to contribute aroma and flavor. Mosaic is the quintessential dual-purpose hop varietal. Adding it early in the boil creates a clean, pleasant bitter character in the finished beer. Adding Mosaic late in the boil, or using it to dry hop post-fermentation, creates an aromatic bouquet of blueberry, orange, mango, and even hints of stone fruit. The name Mosaic is a reference to the broad spectrum of pleasant fruit aromas and flavors that this hop can unlock .

Mosaic (the beer) brings out all the best aspects of Mosaic (the hop). Aromas of pithy grapefruit, fresh orange, and hints of berries and mango burst from the glass. The malt bill is clean and crisp, with just enough sweetness to balance the bright, fruity hop character.

This hop is like a cheat code, unlocking crazy bouquets of aroma and flavor. And this beer is the perfect example of what Mosaic hops can do. The depth of flavor is as impressive as it is delicious.

What foods would pair well with Mosaic?

A shaker pint glass, or even better, anything with an inward curve to capture and release those intense hop aromas. 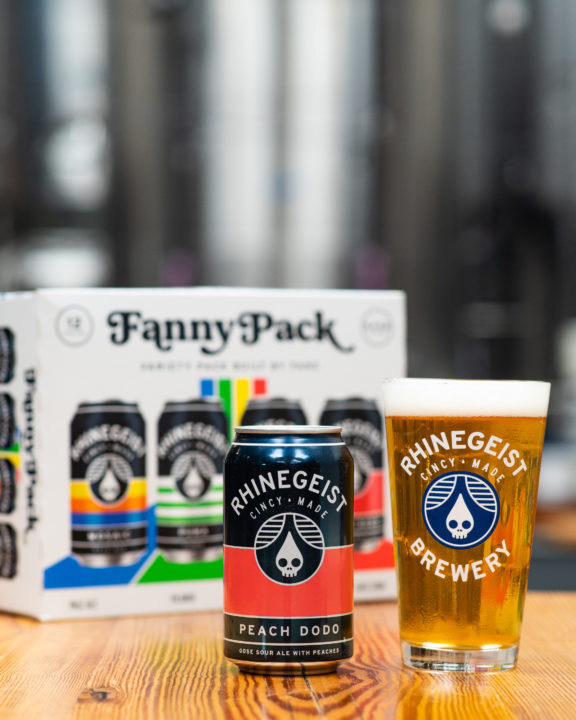 What is the origin story of  Peach Dodo (and goses in general)?

Gose is an extremely old style of beer, most likely originating around the year 1000 CE in the Saxony village of Goslar, along the Gose river. Located Northeast of Bavaria, this region wasn’t under the restriction of the Rhineheitsgebot, the purity law that limited the ingredients used in brewing to barley, water, yeast and hops. Gose is historically brewed with a malt bill that’s at least 50% wheat, and finished with the additions of both coriander and salt. The beer also traditionally undergoes open fermentation, where natural lactobacillus creates sour, lactic acid. Gose’s popularity faded along with the rise of lagers, which largely took their place as the refreshing, warm-weather drink, but the style was rediscovered and popularized by craft brewers in Germany, the USA, and many other countries.

When we first launched Peach Dodo, we used a process called “kettle souring,” where there are actually two separate fermentations that occur. The first happens in the kettle, hence the name, where lactobacillus bacteria is kept at a high temperature to create lactic acid, which is the main sour character in this style of beer. After that, the beer is boiled following the usual brewing process, which also kills off all that lactobacillus. Standard brewer’s yeast can now be pitched into the beer, allowing the regular, alcohol-producing fermentation to take place. We also add fresh peach juice, and allow it to completely ferment as well. With all that said, there have been major advances in the development of saccharomyces (standard brewer’s yeast) strains that also produce lactic acid while creating alcohol. This means we can now brew “kettle sour” style beers without the need for the lactobacillus fermentation step. This not only saves time and resources, but these newly developed yeast strains produce lactic acid without also producing unpleasant sulfur compounds, which are an unwanted by-product of the lactobacillus method.

Crisp, clean acidity, mild additions of salt, and fresh peach juice all combine to create a brew that’s as flavorful as it is refreshing. The fruit character gives the initial impression of sweetness, enhanced by mouth watering acidity, that’s quickly washed clean by palate-cleansing salinity.

It’s been incredibly hot lately, and we still have plenty more summer to go. Peach Dodo is thirst-quenching and palate cleansing, making it the perfect beer to pair with food, or to enjoy on its own while sitting in the shade on your deck.

What foods would pair well with Peach Dodo?

Peach Dodo would go great with poke or sushi. 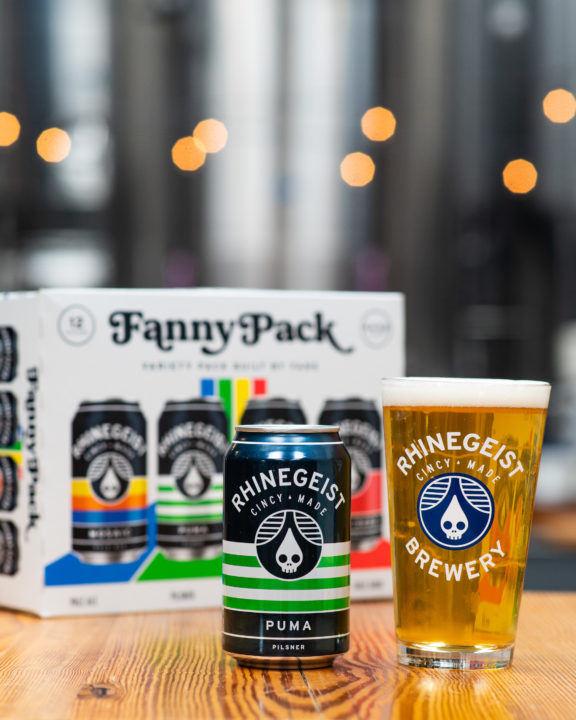 What is the origin story of  Puma?

Traditional Pilsners are among the most beloved styles within the craft brewing industry. Combining the best characteristics of a lager with the intense flavor of hops can create an amazing brew, and we wanted our own iteration. Puma became our version, drawing inspiration from various traditional Pilsners, along with a few American craft offerings.

This is a house favorite that also resonates with our fans. What is so appealing about Puma?

As I mentioned above, Pilsners are lagers that are heavily hopped. The hops used are typically of the floral, European variety. This union produces a brew that’s dry, effervescent, and packed with flowery hop aroma. People just love a good pilsner!

Loads of floral aromas, like geranium and lavender, sit atop a delicate lager base, allowing their flavor to entirely dominate the aroma. Early hop additions in the boil increase the bitterness, enhancing the crisp, dry finish.

Puma is brewed as close to a traditional Pilsner as possible, and it shows. This beer tastes timeless and classic.

Smell: Fresh geranium and lavender with hints of water cracker and malt.

What foods would pair well with Puma?

Puma would go great with a Cobb salad.